Following a major clearout of the Jessica’s wardrobe this week left her with very little suitable summer clothes meaning that a shopping trip was in order.  Generally neither of my daughters enjoy shopping trips.  The mere suggestion has always been met with cries of ‘do we have to come?’  The answer to them this time was a resounding YES YOU DO! Jessica has recently started to get an opinion about clothes, what she likes, what she doesn’t, what she’s prepared to wear and what she won’t.  Where previously I could pick up a few items, put them away in her drawers without a second thought – now I have to do a whole consultation on my return home with purchases, and her new found thoughts on what looks good and what doesn’t has meant that I’ve had quite a few items to return to shops. So, no more, if she wants to express her opinion, she has to come with me, choose her own and try them on in the shop.

This was really the first time we had done the whole girly shopping expedition, choosing outfits, deciding what goes together, when she would wear it and then with armfuls of tops, skirts, dresses in to the changing rooms.  It felt GOOD!  I loved it, and I think she did too.  Standing in front of the mirror, turning one way, and then the other, a quick twirl here and there, checking herself out.. my girl is growing up.  Personally I love to shop, I love even more finding a bargain, and I can’t wait to share more of this mum and daughter time together. A successful shopping trip of course must be rewarded – hence the cookies

This week saw Natalie lose her second tooth.  I dealt with it better than I did at her losing her first tooth a couple of weeks ago!

Her losing her first tooth was a bit of an emotional wrench.  I suppose because I wasn’t expecting it.  She has only just turned 6 a month or so ago, she didn’t her first tooth until she was almost 15 months old, so I suppose I figured she would starting losing them quite late.  However, on collecting her from school one day, she ran to me, beyond excited to tell me that her tooth was wobbly… REALLY WOBBLY – and she kindly demonstrated it to me by pushing it forward and backward with her tongue (eeww!)

After a few palpitations, jiggly tummy feelings and a wave of sadness I managed a smile and feigned excitement about the prospect of a visit from the tooth fairy. I know its a normal, expected part of growing up, its just I wasn’t quite prepared for this milestone in her childhood.  She is my youngest, she is my baby and it brought home all to quickly how fast both my girls are growing up.

So, just a matter of weeks later, the 2nd tooth is out.  It got wrapped up, placed carefully under her pillow.  That night she brushed, flossed and mouthwashed her teeth like never before! (I tell them that the tooth fairy checks their teeth when she visits to make sure they are looking after them properly!)

Jessica reminded me (AGAIN!) that her last tooth got lost before it reached its destination of under the pillow and I’d promised we would write a letter to the tooth fairy to explain the situation and see if she could find it in her heart to still leave her the £2.  I’d forgotten (bad mummy status – see prev blog for more bad mummy/good mummy) So we set about rectifying that with drawing a nice picture, and including a letter (a bit of a begging letter – Jessica certainly knows how to pull the heart strings!)  Letter was placed on the pillow and Good mummy status was reinstated! 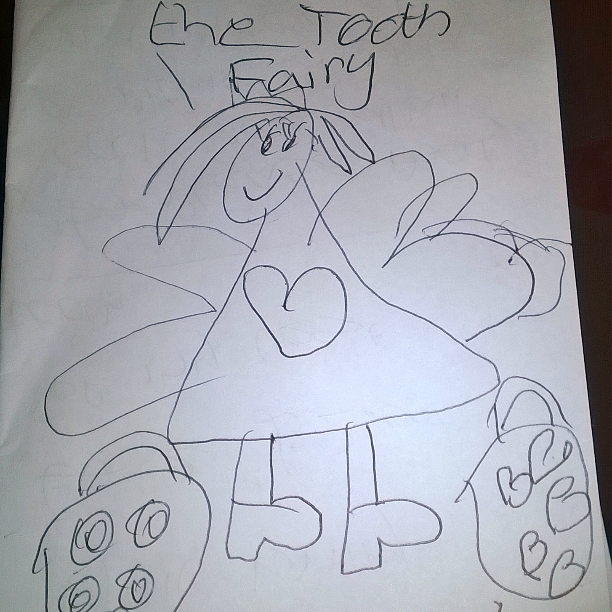 Jessica – thoughtful as ever came back downstairs, just to let me know she had opened the window slightly in their bedroom so the tooth fairy could get in easily, and she had left the fairy lights on around the bed, so that she could see better and not bang her head on the bunk beds.  You’ve got to smile!  I’m not sure how much longer I have of her believing in the magical, make believe world of faires, santa clause etc, makes my heart sink a little when I imagine the day she lets me know that ‘I know that they’re not real!’

But for now, they believe, they get excited, it prompts questions I’m not sure how to answer – my favourite from Natalie on the tooth fairy – “Who leaves the toothfairy her £2 when she loses her teeth?”… errrm??

Such conflicting emotions this week of loving the fact that they are growing up, that we are sharing more but wanting to hold on so tight to their childhood as it disappears before my eyes.

Linking up with Ordinary Moments

I had one of those horrible moments this week where I really felt like a totally bad mum.  There are no doubt many times during the week that I’m not the best mum I can be, but I try, and generally feel I don’t do too bad a job – after all the kids are usually happy, healthy, clean (well most of the time) and they have managed to survive my parenting for the past 8 and 6yrs without too many mishaps.

This week Jessica had some sort of dance/gym workshop going on (I wasn’t too clear on the details, one of those things that she mentioned to me whilst I was talking on the phone and cooking dinner at the same time, so it did not really register properly). She had told me a repeatedly (much to her annoyance) that she needed her full PE kit with her to join in. Her having come home in some of it a few days earlier after Sports Day meant it wasn’t in her kit bag as usual.

On arrival at school in the morning it dawned on me that we’d not brought it in. Bad mummy!  Rushed to tell the teacher and find out what time she needed it – phew – as long as it was dropped at school reception before 1pm it would be fine.  No probs I thought, got some admin work to do at home this morning, a meeting scheduled for 12.30, so could easily drop it off on the way to the meeting – all sorted – good mummy status resumed.

However, on leaving my meeting at 2.15pm, as I walked to the car, I suddenly got this sinking feeling, a wave of guilt washed over me as I realised that I had totally forgotten to take the PE kit she needed to school. I felt sick, tears pricked my eyes as I thought how upset she would’ve been, that she might not have been able to join in.  How could I have got so distracted as to not be able to remember one simple task.  I was gutted, felt like the most terrible mother in the world.  Ok, so I tried to put it in to perspective – it wasn’t the end of the world, she might have been able to borrow some from lost property, it was just a little workshop – but the bottom line was that I’d let her down and I felt awful for it.

As parents – do we not all say our first priority are our kids.  I know I do, but in reality, their needs often come lower down the list than they should.  It’s not a conscious thing, I think I find it all to easy to blame work commitments, being too busy, multi tasking, too tired – my list of excuses could go on.

As she came running down the path after school, I looked for a pained expression, I was expecting red rimmed eyes and tear stained cheeks.. but no.. happy and smiley as ever.  I rushed towards her full of apologies and excuses as to why I didn’t do as I’d promised.  She smiled, hugged me, said ‘its ok mummy, really’  One of the things I love the absolute most about my children is their ability and willingness to forgive in an instant.  No laying on of guilt, making you pay in someway for your mistake so that you learn your lesson.

Just straight forward, I love you so you are forgiven.

What do you learn from your children?

The summer term of classes has finished, so I now have a couple of weeks where I have a little more free time as I’m not instructing as much. It feels really odd not to be rushed off my feet everyday, and for the first couple of days I found myself feeling quite lost and not quite sure what to do with myself.

So I decided to let myself have a few little indulgences this week, do some little things that make me happy, some simple pleasures that I normally don’t get time to enjoy.  Here are a few so far:

1. A spot of gardening – love growing things, I don’t  always do it successfully, but I’m having a few triumphs this year – lettuces, and the courgettes are coming along, I have a reasonable sized cucumber in the offering – something I’m particularly proud of as I failed dismally at growing cucumbers last year.  I’ve also got potatoes, tomatoes, strawberries and raspberries – however – the jury is still out on the peppers and butternut squash at the moment!

2. An afternoon bubble bath, home alone, no kids shouting Mum every 2 seconds – just me, the bubbles and total silence

3. A catch up over a brew with my bezzie mate – an hour of putting the world to rights, can’t beat it.  She is off work at the moment with a broken foot – so would be wrong not to take advantage, stick the kettle on and crack open the chocolate hob nobs.

4. Pouring over an armful of magazines, total guilty pleasure –  in my younger days it was Heat, Closer – any celeb trash – now-a-days its Essentials and Good Housekeeping – what happened to me – ditched the gossip for recipies and crafting tips!

5. Homemade pamper time – was told somewhere, by someone I’m sure, that Avocado, natural yoghurt and oats was a natural Botox.. hmm.. not really sold on it, but I enjoyed adding a bit of garlic and lemon juice to the left over mix and putting it on pitta bread with a few toasted pine nuts rather than my face!

6. An afternoon nap – don’t think I’ve had those since the girls were babies and we would doze together for half on hour on the sofa.  A powernap is certainly the way to go.  No longer the frazzled, snappy mum when they finished school, they had a chatty, almost serine mother – Jessica did ask what sort of happy pill I’d taken and could I take it everyday (cheeky!!)

7. Wimbledon – as a child, I hated tennis, but my mum loved it, and Wimbledon was an annual must watch thing – so over the years I came to not only appreciate but really enjoy watching it. To carry on the tradition, I now inflict it on my children. I’ve still not managed to watch a full match, but seen a couple of fabulous games here and there

Its been a week or so of enjoying a few simple pleasures, nothing major, nothing life changing and something I should definitely try and fit more of in to my ‘Daly’ life.

What are your simple pleasures?